provided by Snake Species of the World LifeDesk

provided by Snake Species of the World LifeDesk

Crotalus is a genus of venomous pit vipers in the family Viperidae, known as rattlesnakes or rattlers.[2] The genus is found only in the Americas from southern Canada to northern Argentina,[1] and member species are colloquially known as rattlesnakes. The generic name Crotalus is derived from the Greek word κρόταλον krótalοn, which means "rattle" or "castanet", and refers to the rattle on the end of the tail, which makes this group (genera Crotalus and Sistrurus) so distinctive.[3] Currently, 32[4] to 45[5] species are recognized as being valid.

Members of the genus Crotalus range in size from only 50–70 cm (20–28 in) (C. intermedius, C. pricei), to over 150 cm (59 in) (eastern and western diamondback rattlesnakes).[3] In general, adult males are slightly larger than females. Compared to most snakes, they are heavy-bodied, although some African vipers are much thicker.[6] Most forms are easily recognized by the characteristic rattle on the end of their tails, although a few island populations form exceptions to this rule: C. catalinensis has lost its rattle entirely, Crotalus lorenzoensis usually has no rattle, and both Crotalus ruber lucasensis and Crotalus estebanensis exhibit a tendency for rattle loss. The rattle may also be lacking in any species due to a congenital abnormality.[3]

The rattle consists of a series of loosely interlocking hollow shells, each of which was at one point the scale covering the tip of the tail. In most other snakes, the tail tip, or terminal spine, is cone-shaped, hardly any thicker than the rest of the skin, and is shed along with it at each successive molt. In this case, however, the end scale, or "button", is much thicker and shaped like a bulb, with one or two annular constrictions to prevent it from falling off. Before each molt, a new button will have developed inside the last one and before the skin is shed off its body, the tip of new button shrinks, then loosening the shell of the previous one. This process continues so the succession of molts produces an appendage consisting of a number of interlocking segments that make an audible noise when vibrated. Since younger specimens may shed three or four times in a year, every time adding a new segment to the rattle, the number of segments bears no relation to the age of the snake. In theory, the rattle could become very long indeed, but in practice, the older segments tend to wear out and fall off. How quickly this happens depends on the snake's environment, but end segments tend to break off after the rattle becomes about six or seven segments long; finding specimens with as many as a dozen segments is common. In captive specimens, however, as many as 29 segments have been found.[7][8]

The genus Crotalus is found in the Americas from southern Canada to central Argentina.[1][9][10]

No species of Crotalus is considered aggressive; when threatened, most retreat quickly, but most species defend themselves readily when cornered.[3]

How far these snakes can strike has been controversial. Obviously, this depends on the size of the animal, but other factors may also play a role, such as the species, the position of the body, and the degree of excitement. Additionally, the question of definition exists; from which point on the snake should a strike be measured - from the front, the middle, or the back of the anchor coil on the ground? Even if the length of the specimen is known, once it strikes, determining the limiting point reached by its head and the position of its body when the movement started is almost impossible. Therefore, unsurprisingly, many conflicting statements can be found in the available literature about how far these snakes can strike. Estimates have been given that range from one-third of the body length, to one-half, three-quarters or even the full length of the animal. They rarely strike further than half of their body length, and almost never more than three-fourths, but trusting such values is unwise if only because accurately judging the length of a coiled snake is not likely.[6]

The diets of species of Crotalus generally consist of vertebrates, although many invertebrate species have also been consumed. Smaller species feed mainly on lizards, while larger species start by feeding on lizards as juveniles and then switch to preying mainly on mammals as adults. Prey items more frequently taken include rabbits, ground squirrels, tree squirrels, chipmunks, prairie dogs, gophers, and rats and mice,[11] while those less frequently taken include birds, snakes, and amphibians. Cannibalism has been reported in a number of different species. Individuals that feed on rodents usually release their prey after a strike to avoid their teeth, and these snakes evidently can discriminate between trails left by prey that has or has not been envenomated.[3]: 506

For all species of Crotalus, the most significant threats come from people, but they also face many natural enemies. These include other snakes, such as kingsnakes (Lampropeltis), coachwhips (Masticophis), indigo snakes (Drymarchon), and racers (Coluber); birds, such as hawks, eagles, owls, roadrunners, and ravens; and mammals, such as coyotes, foxes, wildcats, badgers, skunks, and pigs.[12] Certain species of birds frequently prey on these snakes, but this is not without risk. Two cases were reported in which dead hawks found near venomous snakes had suffered hemorrhage and gangrenous necrosis due to snakebite.[3]: 514

The genus Crotalus is ovoviviparous, giving birth to live young.[6] The basic lifecycle of many Nearctic species has been known for quite some time. Females at an age of 26 months undergo vitellogenesis as they enter their third hibernation,[13] mate the following spring, and give birth later in September or October.[3]: 516

Several variations to this basic cycle occur. In North America, the females of some species store sperm in their oviducts for at least eight months, and the males (all species of which undergo spermatogenesis during the summer) store sperm in the vas deferens for at least a year. Thus, species that store sperm for a shorter duration mate in the spring and store sperm in the vas deferens, while those that do so for a longer duration mate in the fall and store sperm in the oviduct over the winter, after which fertilization occurs the following spring.[3]: 516  In addition, species that occur further north, where weather is colder during much of the year and the feeding and growing season is short, may reproduce only every other year or less. Those found in central and southern Mexico or the tropics have reproductive cycles that correspond mostly with the rainy season.[3]: 519

Two main hemotoxic effects are caused by rattlesnake venom. First, zinc-containing metalloproteases act upon capillary endothelial cells to cause platelet aggregation and hemorrhage.[14] Second, the platelet antagonist crotalin creates a severe bleeding effect as it binds to the surface proteins, blocking aggregation.[15] These two starkly different effects may seem counterproductive, but the effect should be profound. Firstly, endothelial-cell disruption causes lysis and internal bleeding. Then, as these hemorrhages increase, the natural thrombin response is hindered by the effect of crotalin increasing the toxic effect. Their observed hunting technique is a bite-and-release method, so a fast-acting toxin would be ideal. Assuming the natural median prey would be a small rodent such as a mouse, the bite would elicit a fear response, quickening heart rate and increasing blood pressure. This would speed the toxic effect, as well as spread the hemolytic and hemorrhagic effects.

Neurotoxic effects may also be caused by rattlesnake venom. These effects vary by species, and within species by population.[16] 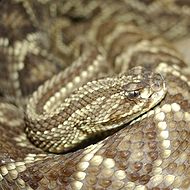 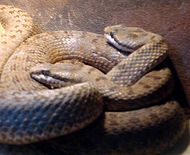 C. ruber Cope, 1892 3 Red diamond rattlesnake The US in southwestern California, south through the Baja California Peninsula, except in the desert east of the Sierra de Juárez, also on a number of islands in the Gulf of California and three islands off the west coast of Baja California Sur

C. transversus Taylor, 1944 0 Cross-banded mountain rattlesnake Central Mexico in the State of Mexico and Morelos. C. triseriatus (Wagler, 1830) 2 Mexican dusky rattlesnake Mexico, along the southern edge of the Mexican Plateau in the highlands of the Transverse Volcanic Cordillera, including the states of Nayarit, Jalisco, Michoacán, Morelos, México, Puebla, Tlaxcala, and Veracruz 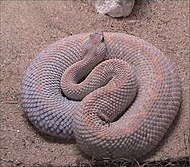 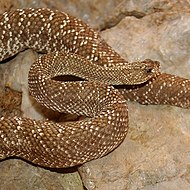 C. willardi Meek, 1905 5 Ridge-nosed rattlesnake The US in southeastern Arizona and southwestern New Mexico, and northwestern Mexico in Sonora, Chihuahua, Durango, and Zacatecas

*) Not including the nominate subspecies
T) Type species[1]

Crotalus is a genus of venomous pit vipers in the family Viperidae, known as rattlesnakes or rattlers. The genus is found only in the Americas from southern Canada to northern Argentina, and member species are colloquially known as rattlesnakes. The generic name Crotalus is derived from the Greek word κρόταλον krótalοn, which means "rattle" or "castanet", and refers to the rattle on the end of the tail, which makes this group (genera Crotalus and Sistrurus) so distinctive. Currently, 32 to 45 species are recognized as being valid.