The Chelidae are one of three iving families of the Turtle (Testudines) suborder Pleurodira. There are some 60 odd species that are distributed in Australasia and South America. All members pull their heads back to the side as in other Pleurodiran Turtles. Well known members of this family include the Mata mata from South America and the Eastern Long-necked Turtle from Australia.

The Chelidae are one of three living families of the turtle suborder Pleurodira and are commonly called the Austro-South American side-neck turtles.[2] The family is distributed in Australia, New Guinea, parts of Indonesia, and throughout most of South America. It is a large family of turtles with a significant fossil history dating back to the Cretaceous. The family is entirely Gondwanan in origin, with no members found outside Gondwana, either in the present day or as a fossil.[3]

Like all pleurodirous turtles, the chelids withdraw their necks sideways into their shells, differing from cryptodires that fold their necks in the vertical plane. They are all highly aquatic species with webbed feet and the capacity to stay submerged for long periods of time. The snake-necked species (genera Chelus, Chelodina, and Hydromedusa) are largely strike-and-gape hunters or foragers feeding on fish, invertebrates, and gastropods. The short-necked forms are largely herbivorous or molluscivorous, but are also opportunistic, with several species having specialized to eating fruits.

The highly aquatic nature of the group is typified by the presence of cloacal breathing in some species of the genera Elseya and Rheodytes.[4] However, some species, such as the eastern long-neck turtle (Chelodina longicollis) from Australia spend significant periods of time on land and are considered highly terrestrial.

The smaller members of the family include the Macleay river turtle (Emydura macquarii) at around 16 cm,[5] twist-necked turtle (Platemys platycephala) at 18 cm and the western swamp turtle (Pseudemydura umbrina) at 15 cm, whereas the larger species such as the mata mata (Chelus fimbriata) and the white-throated snapping turtle (Elseya albagula) both exceed 45 cm in shell length.[6]

Members of Chelidae have unique shell morphology. The carapace often has reduced surface exposure of neural bones, or even none at all.[7] This is due to less requirement for enlarged longissimus dorsi muscles in side-necked turtles.[8]

The inside of the carapace is often heavily buttressed. This has sometimes been seen as a defense mechanism, that is it increases the strength of the shell against biting force, however Thomson (2003[8]) demonstrated it is linked to feeding methods and the prevention of internal torsion of the shell. Chelids also lack mesoplastra, which separates them from the Pelomedusidae. 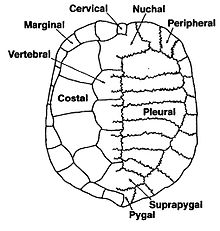 Scute and skeletal elements of the Chelid carapace

The cervical scute is usually present, though it is absent in some species of Elseya and Myuchelys. Otherwise, the carapace has the usual complement of four costals, five vertebrals and 12 marginals (per side). Internally, the carapace is made of eight pleurals (per side), 11 peripherals (per side), a nuchal at the front and a suprapygal and pygal at the rear of the shell. As noted earlier, neurals, although always present, often exist as subsurface elements above the vertebral column.[7] 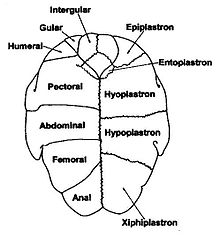 Scute and skeletal elements of the Chelid plastron

The plastron of chelids does not contain any hinges as can appear in some cryptodire turtles. The scute pattern is a unique feature of the Pleurodira and can be used to immediately identify a shell as belonging to this suborder. All cryptodires have 12 plastral scutes, whereas pleurodires have 13. The extra scute is called the intergular. The rest of the scutes and the skeletal structure beneath them are the same as all turtles: paired gulars, humerals, pectorals, abdominals, and anals. The skeletal elements consist of a single entoplaston, as well as paired epiplastra, entoplastra, hyoplastra, hypoplastra and xiphiplastra (Pritchard & Trebbau, 1984).[9] 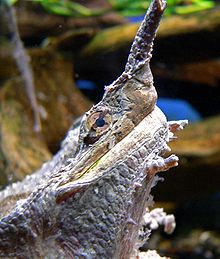 A number of theories of the relationships within the large chelid family have been posited. Using shared derived characters, an early attempt in the 1970s used strict parsimony to determine the three long-necked genera (Chelodina, Chelus, and Hydromedusa) were each other's closest relatives.[10] This was accepted for some time, but brought into scrutiny,[11] because the major differences between the genera showed they all appeared to have evolved independently of each other, hinging on the fact that although they had long necks, how they used them and their structures were different.

A number of additional data sets were developed that used electrophoresis and nuclear and mtDNA analysis; these all agreed on the independent evolution of the three long-necked clades.[12][13] This was culminated in a reanalysis of the morphological data which demonstrated the convergence of the clades on a sweep of distinctive features needed for their piscivorous diets,[14] Thomson, 2000.[15] The subfamilies within Chelidae show the monophyly of the majority of the South American species and all the Australian species, with the far more ancient Hydromedusa as sister taxon to both these other groups.

The family Chelidae contains about 60 species within around twenty genera:[12]

The Chelidae are one of three living families of the turtle suborder Pleurodira and are commonly called the Austro-South American side-neck turtles. The family is distributed in Australia, New Guinea, parts of Indonesia, and throughout most of South America. It is a large family of turtles with a significant fossil history dating back to the Cretaceous. The family is entirely Gondwanan in origin, with no members found outside Gondwana, either in the present day or as a fossil.