The synurids (Synurales) are a small group of heterokont algae, found mostly in fresh water. 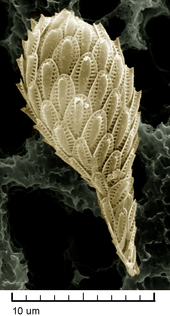 They are covered in silicate scales and spines. In Synura, these are formed on the surface of the chloroplasts,[1] two of which are usually present, but sometimes only one divided into two lobes is seen. The cells have two heterokont flagella, inserted parallel to one another at the anterior, whose ultrastructure is a distinguishing characteristic of the group. Both asexual and isogamous sexual reproduction occur.

Two major genera are included here, divided into species mainly based on the structure of the scales.

Both are common plankton in lakes and ponds.

To reproduce the parent cell splits into two daughter cells which get half of the parent cells scales. The new cells can regrow the scales and grow back into their original form.

The genus Synura was proposed in 1834 by the German microscopist Christian Gottfried Ehrenberg (1795–1876).[2]

The synurids were originally included among the golden algae in the order Ochromonadales as the family Mallomonadaceae. They were formally defined as a separate group by Andersen in 1987, who placed them in their own class Synurophyceae, based on an earlier suggestion by Cavalier-Smith.

The Chrysophyceae and Synurophyceae are part of a common clade.[3][4]

The synurids (Synurales) are a small group of heterokont algae, found mostly in fresh water.